Owen Clough turned his hand to fiction after retiring 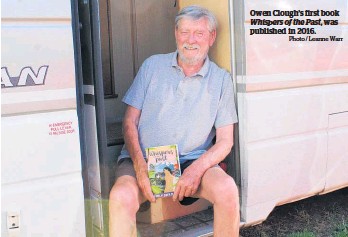 For author Owen Clough, writing has been a learning experience. When he was writing his first novel, he admits he didn’t know much about the etiquette of novel writing. Such as adding a new paragraph for new dialogue. Writing fiction was a very new thing for the Hawke’s Bay local. Clough has had quite a few occupations over the years, but it was around the time of the big earthquake in Christchurch that his life took a bit of a shake-up as well. He’d been working a few different roles, including driving a bus from Westport to Christchurch. “Summertime I used to work for the Christchurch tramways. “I’d work there December to March. I’d been with them since ’95 so it was just a continuation of the job.” After the earthquake in February 2011, the tramway system was so badly damaged they stopped operating and Clough was made redundant. He was paid for a couple of weeks and then got a phone call to help the company with a role at Thrillseekers’ Canyon in Hanmer Springs, painting the homestead there. “It was quite neat. The boss’ wife would come with us and she’d cook lunch.” After that job came to an end, he got another call asking him togo to Auckland as they were starting up the tram in Wynyard Quarter. He was asked to do some training and help set it up. Initially reluctant, he talked with his sister, who had lost her husband, and asked if she’d like a couple of boarders for a while. “We boarded with her for about 18 months.” Once he turned 65, he made the decision to retire. “That was it. I was gone.” Clough and his wife Kaye, who he married at age 20, began “pottering around”. They have a section in Takapau, but have spent most of the last few years travelling around New Zealand in their motorhome. In 2014, he began writing his first novel, Whispers of the Past. “I started writing when I was on the road.” Whispers of the Past is the story of three “blokes” who work for the Department of Conservation in Tongariro National Park. Some strange weather pattern sends them back to the early 1860s and the beginning of the New Zealand Wars. Three men, with knowledge of the future and the tools of the 21st century, transported in time, trying to stay out of harm’s way and not change history. While researching, Clough decided not to read books by historians on the period. “I wanted to get a feel of what New Zealand was like in the 1860s,” he says. During that era, of course, there would have been a lot more bush. “I sat in the bush and listened to the noises.” Clough says it was probably quiet compared with what it must have been more than 150 years ago. “It would have been really noisy,” he says. In fact, he has a diary written by Kaye’s greatgreat-grandfather who had fought in the wars back then and in one of the entries, he complained about the bird life making it difficult to hear orders. Another thing he researched was how people spoke. Since his main characters were from the 21st century, he could use normal colloquialisms. For others, he tried to stay true to the time period and even went on to a marae in Ngāruawāhia to talk to an elder about it. He asked the man, who he says was probably in his 90s, if he remembered his grandfather. When asked how the grandfather spoke, the elder said he spoke “with a real plum in his mouth” — that is with an upperclass English accent, which Clough says would have been from when the missionaries first came to New Zealand. “I brought that into the book.” He says he also did a lot of research on the ground, talking to people and looking at various historical articles in the likes of Papers Past. While he might have made a few factual errors, he felt since the book was fiction, it wouldn’t matter too much. The book, which he published in 2016, is the first of a trilogy. He’s since written a fourth book, which is set in the future and centres around a plot of Australia raiding New Zealand for its water. That one is now in the process of being proofread. What prompted his foray into novel writing was genealogy, which he’d been doing for more than 40 years. He’d had people suggest he write a book on his family but wanted to do something else instead. “I thought I could do a story about some blokes going back to that time. And that’s when I decided to write a story using my knowledge about the past and history and used that knowledge to write historical fiction.” He admits to a few mistakes in formatting the novel. “You learn and as the second book and the third book come through, it’s better designed, you learn a little bit more.” Writing is a journey, he says. “You learn a heck of a lot about the country and how people react.” Clough feels he’s done pretty well out of the writing, although he knew he was never going to make a lot of money from it — writing is a hobby. He has got some copies into libraries by talking to the librarians and some schools, convincing them to buy at least one. It was a good excuse to travel in the motor home, he says. “We make the most of it.” The trilogy, Whispers of the Past, Shadows of the Mind and Clearing of the Mist are available through