Pair ‘lucky to be alive’ 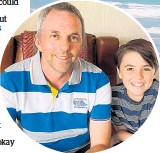 Napier man Ian Morton put his own safety at risk to rescue his 12-year old son but says both are “lucky to be alive” after being plucked from the surf with the help of a makeshift flotation device. About 1pm on December 28, Morton was having fun in the waves at Porangahau Beach with his son Aidan. But it didn't take long for him to find out how quickly a situation could change while swimming. “I was a bit concerned about how far out my son was. He is quite a good swimmer and kept saying he was okay,” he told Hawke’s Bay Today. “I insisted that he had to be closer to where I was and he started shouting for help, I knew I was putting myself at risk but he's my son and I had to help him.” Morton said that at no point was he “unsafe”, until he went to help his son. “He's 12 and thinks he will be okay in any situation.” He expended “a lot of energy” getting to his son and turning him around and moving towards the beach, and was unable to get any momentum himself. “I went under a couple of times and became disoriented and started to swim out to sea instead of towards the beach. “My son was screaming at me that I was going the wrong way, I tried to catch my breath and went as hard as I could but wasn't really moving forward.” He said his son was about halfway back to shore by this point, but because of how tired he was he didn't think he would make it. “We both just kept trying, we must have been out for close to 10 minutes.” He saw a man, whose identity he intends to find out, come out with a small floating log and help his son, before helping him. “By the time he got to me I realised I could now just touch the bottom and he helped me to shore, where I collapsed with exhaustion. “I honestly believe we are both lucky to be alive.” The log was used as a “makeshift flotation device”, he said. “He took my son in a bit so he was able to walk to the shore, then came back out for me and I was able to just touch the bottom when he got to me. “He put his arm around me and supported me as I had no strength left and made sure I got up the beach safely. “He was only a teenager and it was very brave of him to do what he did.” Morton was subsequently airlifted to Hawke's Bay Hospital by rescue helicopter, where he spent a couple of hours, and then spent yesterday recovering. Surf Life Saving New Zealand, Hawke's Bay Area Supervisor John Callinicos said there were no lifeguards stationed at Porangahau Beach, it was unpatrolled, so the actions of the man showed initiative. The patrolled Hawke's Bay beaches have been busy with swimmers, but haven't yet had seen dramatic rescues like Morton's. Callinicos said the weather conditions combined with the proactive lifeguarding prevented any major issues from arising. On Boxing Day and the day-after between 1100 and 1200 people visited Waimarama and Ocean Beach, he said. “The conditions were fortunately quite nice, and our lifeguards ensured nothing major happened.” He said there were two minor rescues at Ocean Beach when a few people got caught in a little rip. “They were picked up swiftly with an IRB and a rescue board and lifeguards Thomas Kay, Marshall Soaness, Sarah Birkett and myself included helped out.” He said three lifeguards patrolled the town beaches, Waipatiki, Westshore, and Pacific, and four lifeguards patrolled Ocean and Waimarama on weekdays. None of CHB's beaches have patrols. There have been 31 drownings around the country since the beginning of summer - more than last year's whole three-month summer period, when 25 people died.