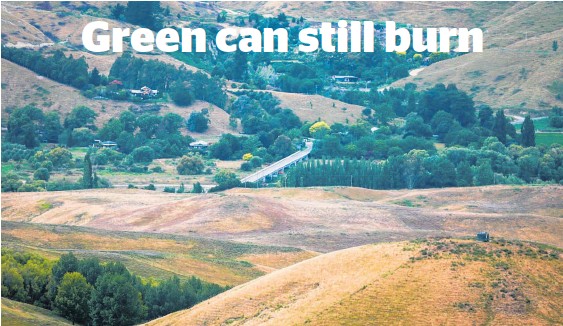 Fire authorities are set to put restricted fire season notices in parts of Hawke’s Bay and northern Wairarapa, but say the unusually “green” summer could leave some people wondering why. Notices of restrictions are expected to be issued today, meaning permits will be required for the lighting of fires in the open in specified areas. Penalties for infringement are governed by the Fire and Emergency New Zealand (Fire Safety, Evacuation Procedures, and Evacuation Schemes) Regulations 2018, and include fines possibly over $11,000 – and potential culpability for any resulting damage. With much of the region unseasonally green, the restrictions have come about two months later in the summer than in most years. Fire and Emergency NZ regional community risk manager Nigel Hall, whose area extends from Eketahuna to Mahia (the Tararua, Central Hawke’s Bay, Hastings and Wairoa districts and Napier City), said that ultimately, whatever restrictions were in place, people should watch and control their fires, and ensure they were extinguished. He said the decision to introduce the restrictions was made at a weekly meeting yesterday. Later in the day the specialists were still working on finer details before “the legals” of making the notices official were expected to be completed today. Meeting attendees consider data from weather stations and other sources before making the decisions, which have also been later than usual in other areas, including the Auckland region where a restricted season was announced also yesterday. Hall said the drier areas of the region at present were in Central Hawke’s Bay, and a “two-kilometre coastal band”, particularly including the Porangahau area on the southern coast. The national fire indices map for the region yesterday was mainly blue for moderate, the second step on a scale from green (low) to red (extreme), with Porangahau at brown (very High), and Wairoa area at green. A remote and distant area west of Napier and Hastings was rated high risk. Hall said a big problem for the fire services was that the season had produced vast growth of “fuel”, such as grass, that in high temperatures and stronger winds would dry to become a significant fire risk within just a few days. Temperatures this week have reached the more seasonal levels of 30-plus degrees Celsius, although the peaks were around 28C yesterday. National weather agency MetService was forecasting “another week of summer sun”, but was also warning of possible impacts from Tropical Cyclone Cody, which had formed near Fiji. MetService meteorologist Dan Corrigan explains: “There is still a high amount of uncertainty surrounding the impact that this system may have in a week’s time, but we are monitoring it closely and will keep everyone updated.” High seas were expected for the weekend on the Northland coast, but, while temperatures hover in the upper 20s, changes to a sub-20C climate could follow. A “restricted” fire season notice means lighting a fire is riskier than usual, and a fire permit is required for most fire types and may also have specific conditions to make sure fires can be safely lit and remain under control. The next step up is a “prohibited” fire season, that means lighting fires in the open air is not permitted, with existing permits suspended, although fire permits could still be granted in exceptional circumstances.